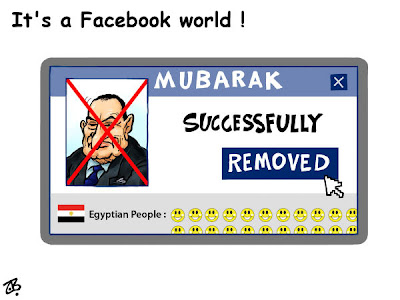 This cartoon, captioned "Its a Facebook world!" likely due to the fact that social networking sites such as Facebook were the main organizational tools as the Egyptian revolution began; protesters organized demonstrations and protests through Facebook and Twitter causing the internet to be shut down in Egypt. Facebook and Twitter playing such an instrumental role in a revolution is a product of the 21st century and set this movement apart.
Posted by Cecilia at 6:14 PM 1 comment: 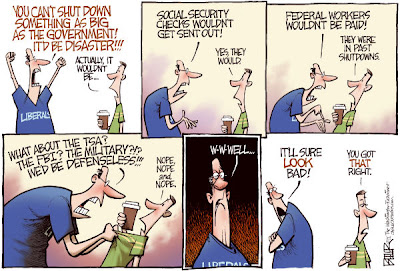 This is an untitles cartoon from the "Government Shutdown" topic section of cagle.com by artist Nate Beeler.
The cartoon depicts a conversation between two people, one wearing a tshirt labeled "Liberals" is in distress over the governement shutdown. He laments the fact that social security won't be paid, federal workers won't be paid, and we would be "defenseless" in the even of a shutdown. The other man informs him this isn't the case, none of these things would happen, it would simply look bad. The message is a ironic and satirical take on the fact that people seem unclear on what a governement shutdown actually entails; there is a great distress over nothing in a sense.
Posted by Cecilia at 5:52 PM No comments: 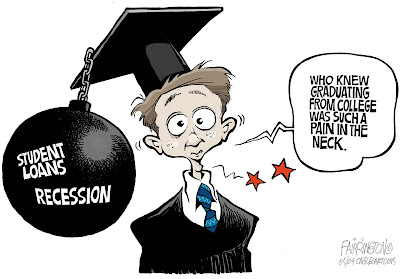 This is an untitled cartoon from the "Student Loans" topic section of cagle.com by artisy Brian Fairrington.
The cartoon depicts a student in his graduation cap and gown with a ball and chain labled "Student Loans" and "Recession" hanging in place of a tassel to symbolize the immense debt that many students find themselves in upon graduating. The cartoon relates to the huge price of college, especially in light of the recent recession and the irony that many students graduate with the hope of getting a career and earning an income but instead must pay off the huge debt they accrued through getting an education.
Posted by Cecilia at 5:12 PM 3 comments: 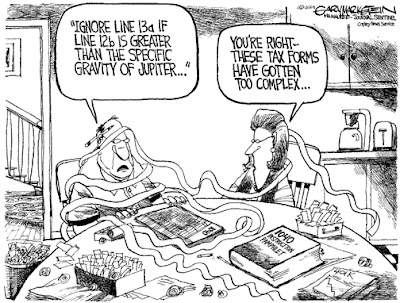 This is an untitled cartoon from the "Terrible 1040" topic section of cagle.com by artist Gary Markstein.
The cartoon depicts a couple all wrapped up in ticker tape as they try to decipher their taxes. The artist used a humorous take on people trying to make sense of the increasingly complicated task of trying to complete their taxes.
Posted by Cecilia at 4:29 PM No comments: 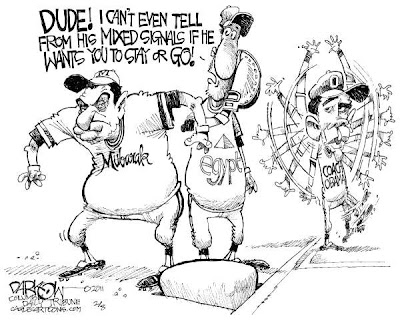 This is an untitled cartoon from the "Obama and Egypt" topic section of cagle.com by artist John Darkow.
The cartoon portrays "Egypt" guarding a base, while "Coach Obama" gives Mubarak confusing signals as whether or not he should go. The artist uses baseball to symbolize the confusion on President Obama's stance on Mubarak in Egypt; Obama has faced criticism on being unclear as to whether he felt Mubarak should step down or not. The artists use of baseball as a methaphor conveys a humorous satirical critiscism of Obama for being unclear.
Posted by Cecilia at 3:57 PM No comments: 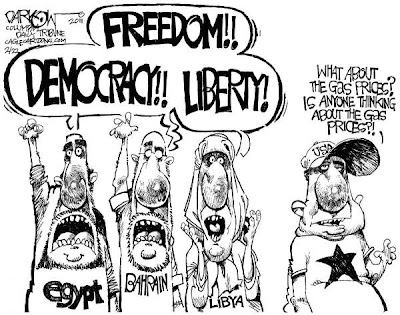 This is an untitled cartoon from the "Gas Turmoil" topic section of cagle.com by artist John Darkow.
This cartoon depicts three people, representing Egypt, Bahrain and Libya, all shouting for "Freedom! Democracy! Liberty!" alongside a slovenly and overweight man representing USA who is more concerned with the gas prices. The artist conveys a satirical message that while countries like Egypt, Bahrain and Libya are fighting for their freedom and justice America is only concerned with its investment in oil. This relatedto the current unrest in Africa and many people's speculation that America is only involved due to our dependence on foreign oil.
Posted by Cecilia at 3:36 PM No comments: 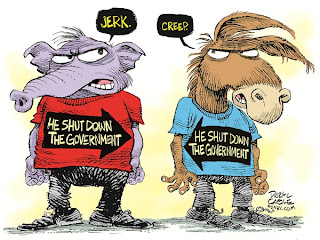 This is an untitled cartoon in the "Government Shutdown" topic section of cagle.com by artist Daryl Cagle.
The cartoon depicts two sullen characters, an elephant and a donkey, each blaming the other for the Government Shutdown. The artist uses the the elephant and donkey to represent Republicans and Democrats respectively; satirically portraying the inability of the two groups to reach an agreement as a petty dispute in which neither party is right. This cartoon's message is that neither party is more to blame for the shutdown and without compromise no resolution will be met.
Posted by Cecilia at 3:17 PM No comments: